5330A Synchro/Resolver Simulator is a rack mount or benchtop instrument featuring integrated touch screen controls and input terminals. This model represents a major step forward as it uses digital technology to produce Synchro and Resolver outputs. Improved flexibility is provided by two fully independent outputs that can be used to simulate two separate Synchro or Resolver signals simultaneously, or can be combined to operate as two-speed outputs. The versatility of this device has been substantially increased by incorporating dynamic modes that enable servo systems to be tested under various simulated stringent field conditions.

Each channel can be independently programmed for specific dynamic mode operations, including rotation (continuous or start-stop), sine, and square and ramp. In addition, IEEE-488, USB, and Ethernet interfaces have been added to extend remote operation capabilities. As an option, a programmable 6 VA internal reference supply can be specified. 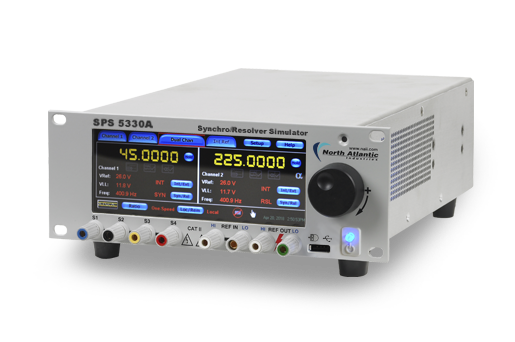 The 5330A includes SSKs to support multiple operating systems. In addition, SSKs are supplied with source code and board-specific library I/O APIs to facilitate system integration.